This is one of India’s largest tech fest, which took place recently at the BITS Pilani, Goa campus in Vasco.

The festival was from 6th to 8th of February and had some great minds from across the world attending it.

I was there too. Participating in Line Following, Robot Race and for the first time, Robokick!

Objective: Design and build a fully autonomous robot which can traverse a black line on a white background.

Line Follower performance: LFR v2.0 was smoooooth, thanks to the PWM control. (Pulse Width Modulation) It traversed all the angles well (90, 60 & 120 degree). Even the T- junctions were quite good apart from the fact that recovery took time. The only problem occurred at the inverted Y- junctions. Due to multiple case clashes (a common error faced by maze solving line followers), the bot took the first path that it sensed. i.e. the pathway back into the loop! Oh nooooo! And there it would continue traversing the loop until I picked it up and put it back on the correct path. (with a hefty penalty of course!) 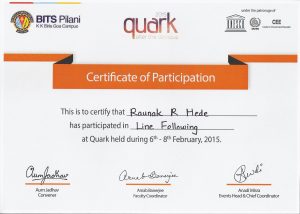 Objective: Design and build a wired/wireless, remote controlled all terrain racer (Basically, a smaller version of an ATV, without you sitting inside it.)

Arena: Track was on a rough terrain which caused a lot of bouncing about. It was a world of obstacles. The track consisted of slopes up to 45 degrees, car tires with loosely stretched plastic to cover the hollow depression, dry grass, sand, a slow windmill, soda-can speed breakers & thermocol obstacles which had to be pushed into fixed areas. Another extremely difficult obstacle, was the double slope platform with a slit in the middle. This consisted of a 45 degree incline upwards, a flat platform with humps of about 1.5 feet and a 45 degree slope downwards. Now while you’re imagining all this, add a 3 inch slit in the middle of the 9 inch wide path. If you’re still having trouble visualising this perilous path, then please watch the video below.

Racer performance: ATR v1.0 performed exceedingly well here. Just a few glitches like hitting the windmill, rumbling off the track once or twice, and being unable to climb the 45 degree incline caused deduction of points. The racer also had weight problems while trying in vain to get out of the sunken plastic in the tire. I think it’s worth mentioning that ATR was one of the few wireless racers on the whole campus.☺ 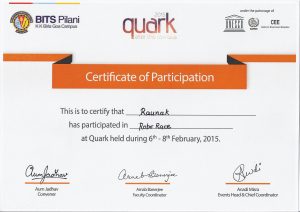 Objective: Design and build a wired/wireless, remote controlled robot which can play one-on-one football with another robot. It should be able to be a good striker and, at the same time, be able to defend it’s own goal.

Arena: This event was held in a square arena of 3×3 meters. The arena had markings on it just like a real football field. There were two open shoeboxes used as goals. A smiley sponge ball was used in the game.

Robot performance: Frankly speaking, my registration for the Robokick event was a spot entry. Previously I had no intention of participating in Robokick, mostly because I had no clue whether my bot would meet the requirements. (They did mention a shooting mechanism on the website. Something my bot lacked completely.) During the Roborace, an announcement was made stating that participants of Roborace were also eligible for Robokick and that spot entries would be accepted. And so I entered the competition with ATR v1.0! After adding a couple of metal plates near the wheels, the very same robot which jumped off a ramp, was ready to play football!

Surprisingly, I won the 3rd place at Robokick☺ 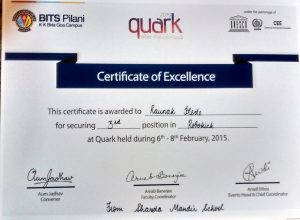