About a month back, I was asked whether I would like to give a talk at TEDxPanaji. Needless to say, I jumped right into this once-in-a-lifetime opportunity!

After several weeks of preparation, revisions, rehearsals at 91Springboard and hard work, the efforts of over a hundred spirited individuals culminated yesterday at TEDxPanaji 2018, at Maquinez Palace – Entertainment Society of Goa (ESG).

The event was divided into 3 sessions with 20-minute breaks in between. At 3:00 p.m. on Sunday 8th April, 2018 at Auditorium 1 of the Entertainment Society of Goa, the second edition of TEDXPanaji began with an introductory video to TED. The compere, Mr. Jervis Pereira, launched the audience into the world of TED, keeping everyone enlivened with his plethora of ‘multipotentialite’ skills.

The first session commenced with an exhilarating performance by the Sai Damodar Group. The auditorium (and my seat) reverberated with a perfect conglomerate of percussion, vocals and strings. 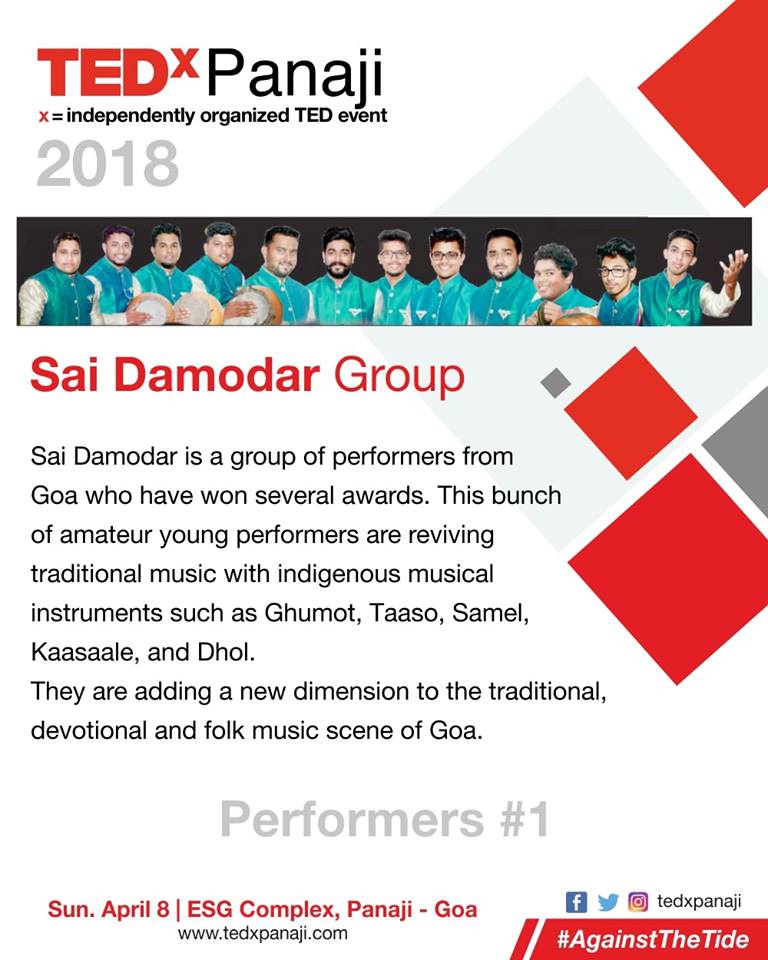 The first session continued with an inspiring video of a talk at TEDGlobal (London) 2015, by Melati and Isabel Wijsen: Our campaign to ban plastic bags in Bali. The initiative they took, going up against seemingly impossible odds, was truly inspiring.

The first two speakers for the evening were Mr. Darryl D’souza and I. Mr. D’souza enlightened us with a fascinating set of natural rules in the field of nutrition, the benefits of which appear to be nothing short of water from a fountain of youth.

And what did I speak about? I’ll give you a hint: It didn’t have anything to do with robotics! (Now wait for the video and enjoy the suspense if you haven’t figured it out yet.) 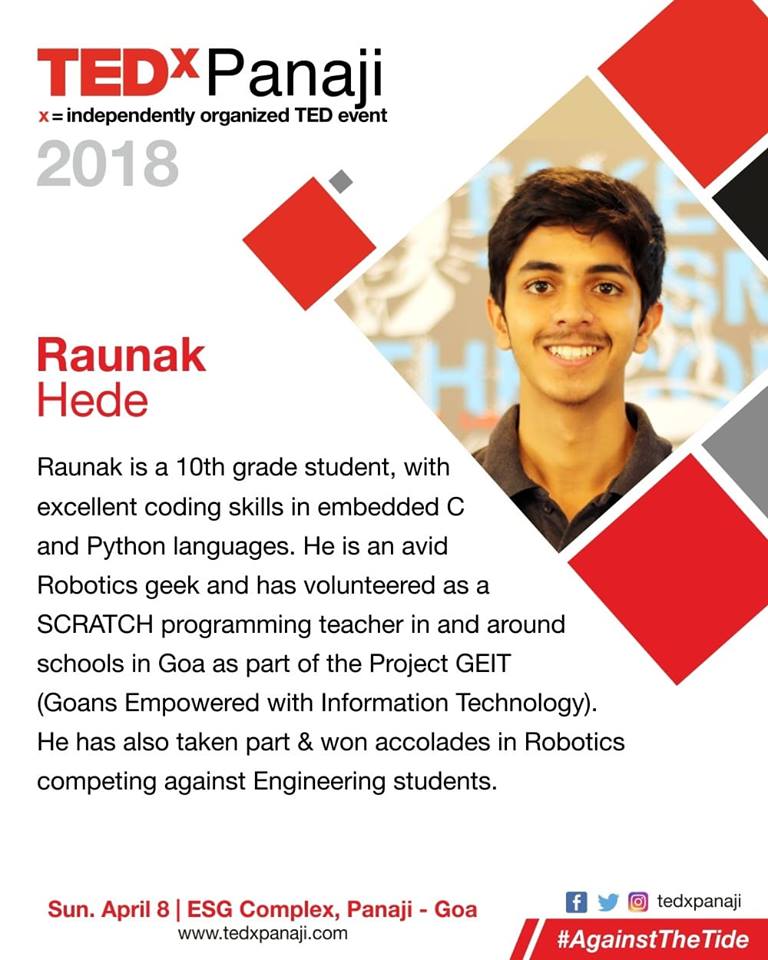 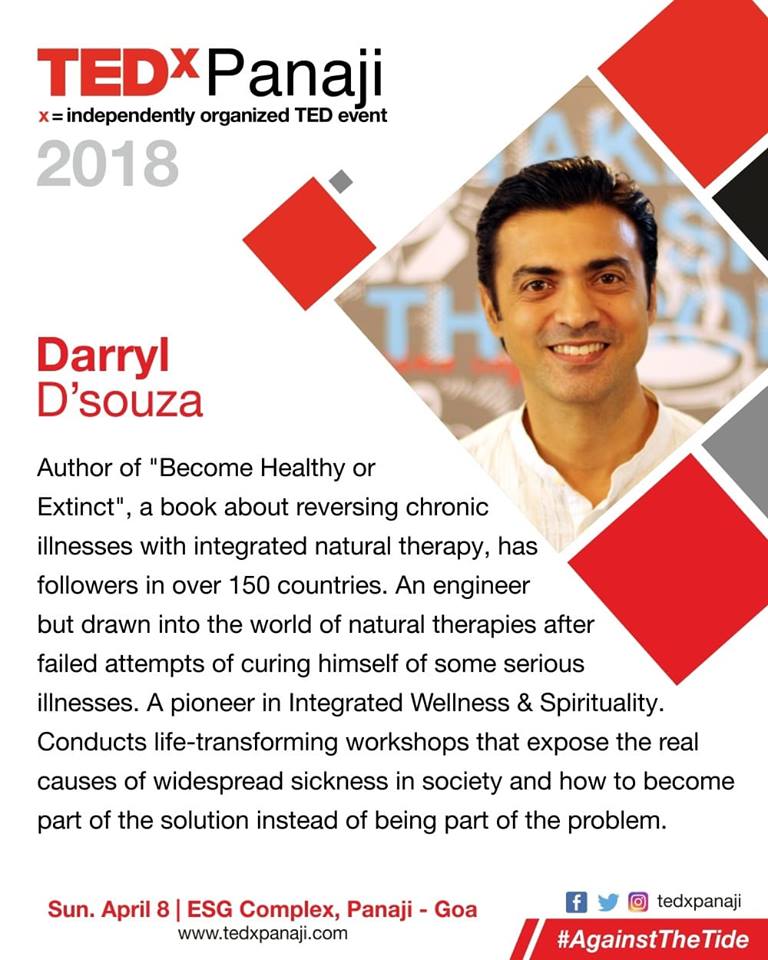 This was followed by a 20-minute break, during which attendees were free to interact with the speakers, check out the TED-Ed stall (under the charge of three enthusiastic student volunteers) and help themselves to a wide spread of refreshments.

Following the break, Mr. Manish Jain and Mr. Abhijit Sadhale spoke. Personally, I consider Mr. Jain one of the pioneers of an equivalent of the ‘Maker movement’ in India. Using hands-on science in the classroom was always misconceived not to be viable by almost all schools across India, but he dispelled this long-standing myth on the TEDx stage!

From Mr. Sadhale, I finally understood why on earth, history (not necessarily as a subject) is so important. More than telling you where you come from, it teaches you to protect and preserve centuries of human work and highly refined skills, developed over several generations, which form an invaluable constituent in humanity’s body of knowledge. 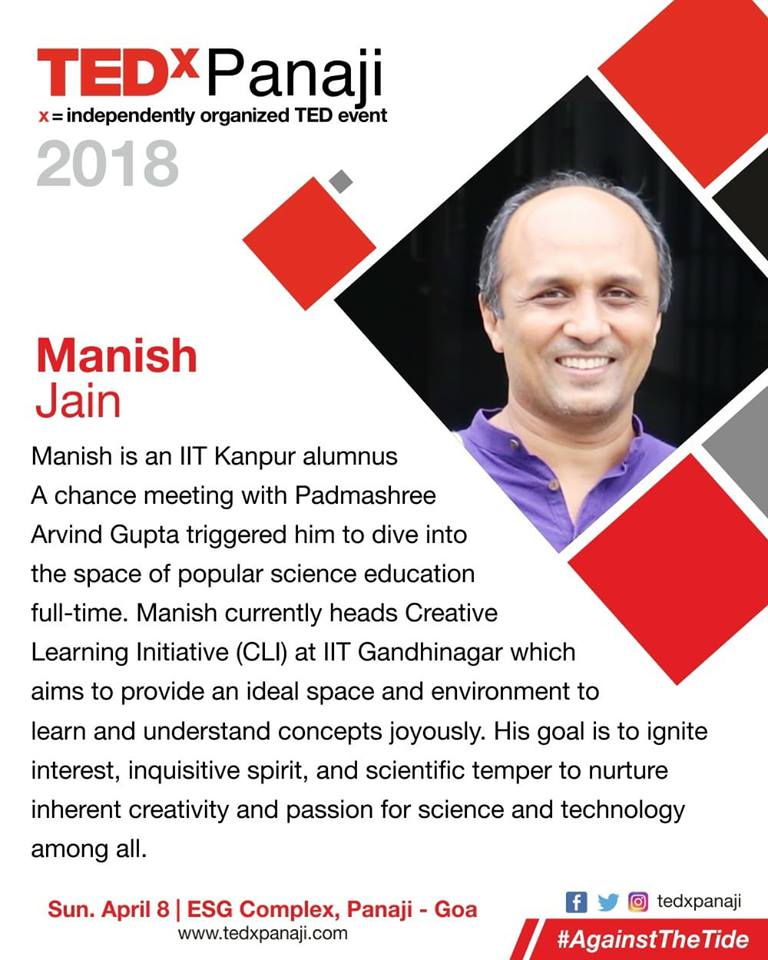 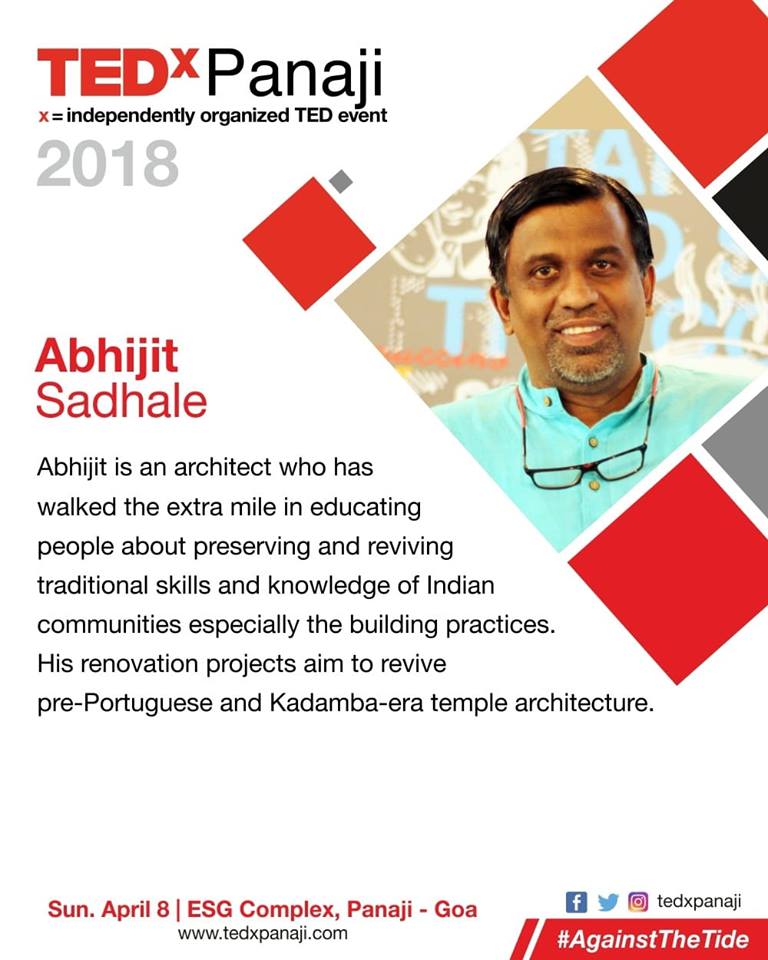 After that, a short (and humorous) video by Rainn Wilson (from the TED Studio): Ideas Worth Dating, was immediately followed by the next speaker, Mr. Donald Fernandes. Mr. Fernandes’ story may be seen as that of a do-gooder, albeit an extremely zealous do-gooder. But when life gave him lemons, he’s the man who planted the lemon seeds and then gave those new lemons for other lives. He went beyond the lemonade, to do an ordinary thing in an extraordinary way. 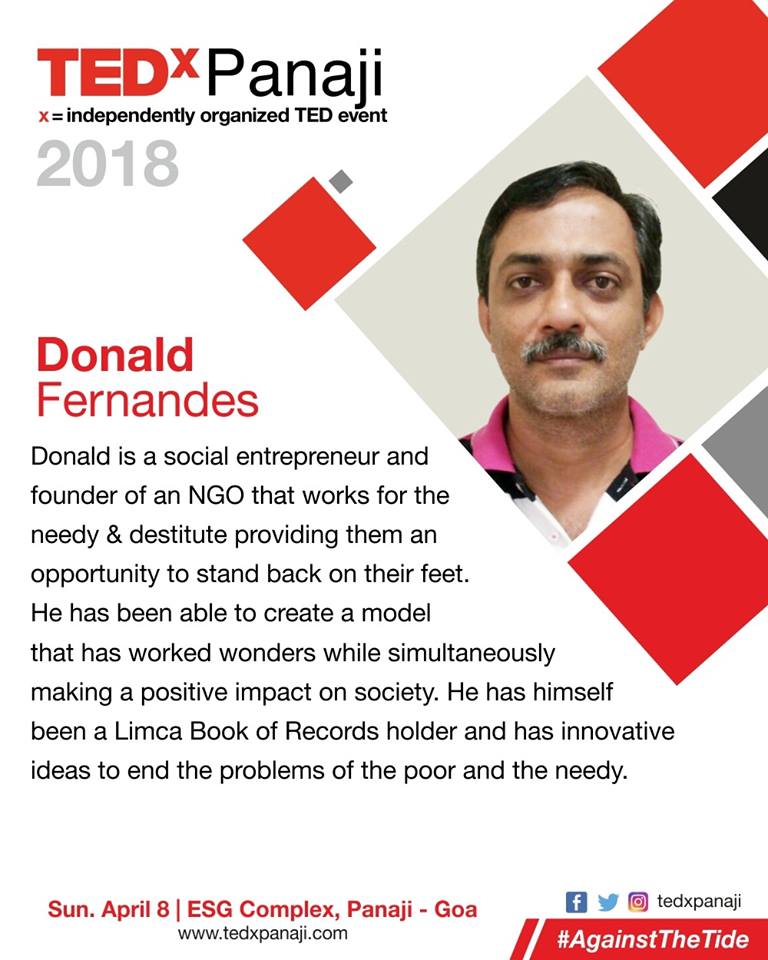 The second session concluded with an exciting Q&A session where members of the audience had an opportunity to question any the five speakers whose talks had been completed, after which there was a 20-minute break.

The third session commenced with a semi-interactive performance by Mr. Drupad Gaonkar. Until I met him, if anyone told me a mime-artist could be called a speaker, I’d probably have laughed. Yet, Mr. Gaonkar went a step further, interacting with the audience, keeping everyone on the edge of their seats, without once uttering a single word! 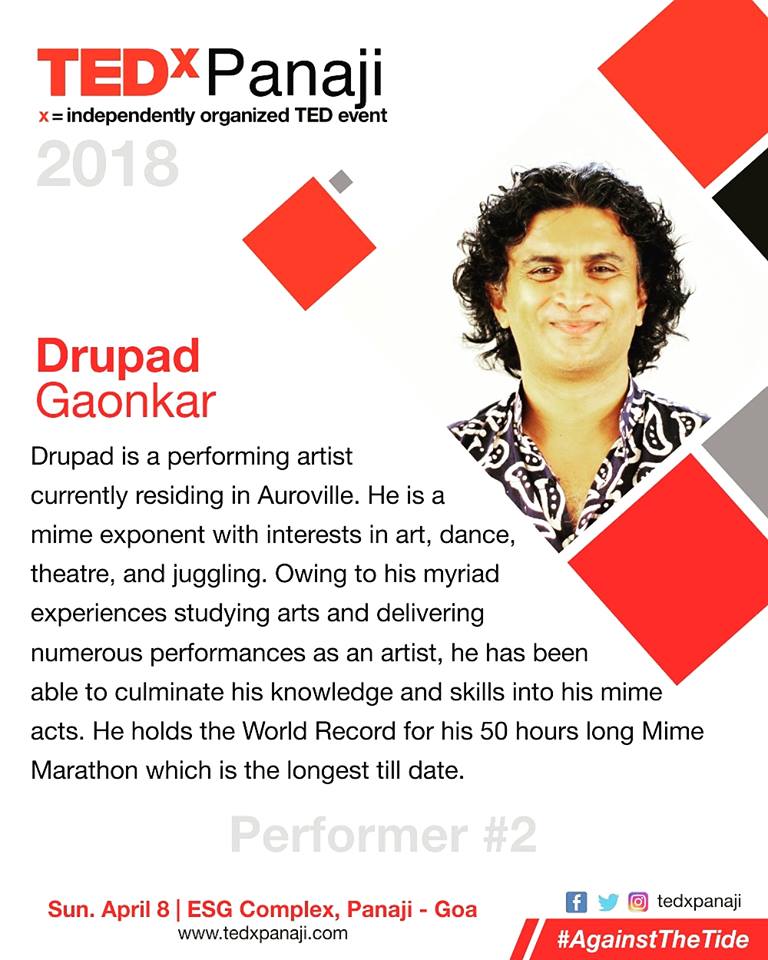 This was followed by a video of a talk at TEDGlobal 2013 by Kelly McGonigal: How to make stress your friend. A certain amount of stress is good for you… provided you think it is good for you! Yes, I’ve heard unstressed people declare, “It’s all in the mind!” but who knew the old saying went this far?

Braving the high seas, the captain’s riveting story could well give Popeye a complex. How many qualified mechanics do you know who can fix a steering gearbox inside a moving vehicle? Yes, he did that and much more!

Dr. Nandita’s talk was indeed, moving. The superficial barriers against inclusive education, both within the classroom and outside it, struck a chord deep within the conscience of humanity we all have, for as she puts it well, ‘inclusion is always ‘in’ us’. 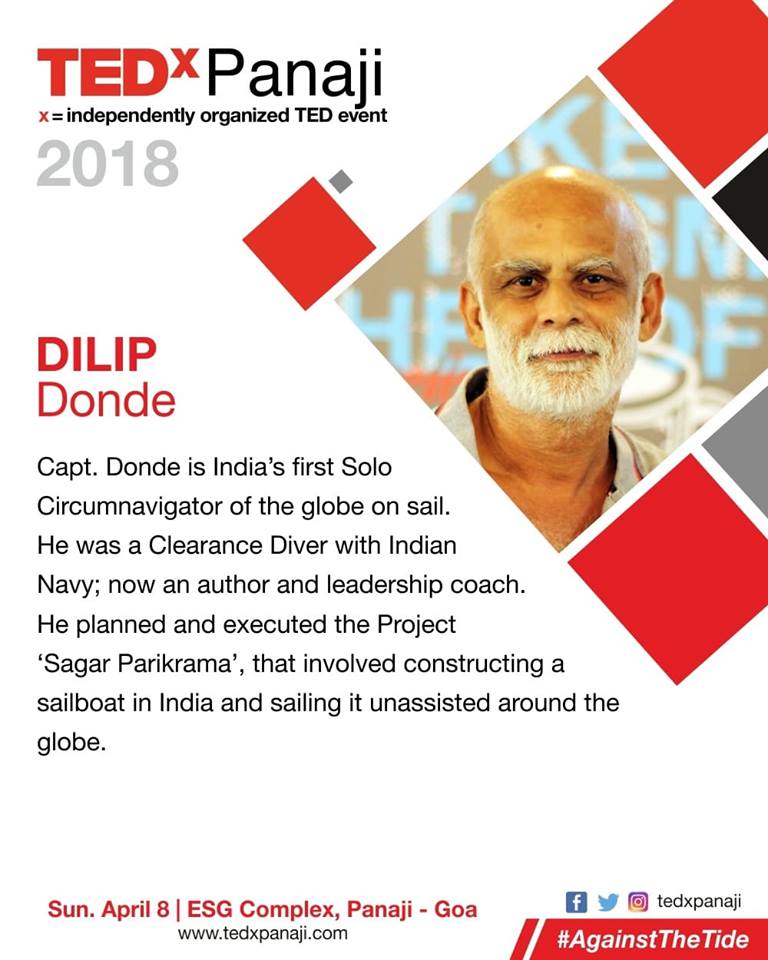 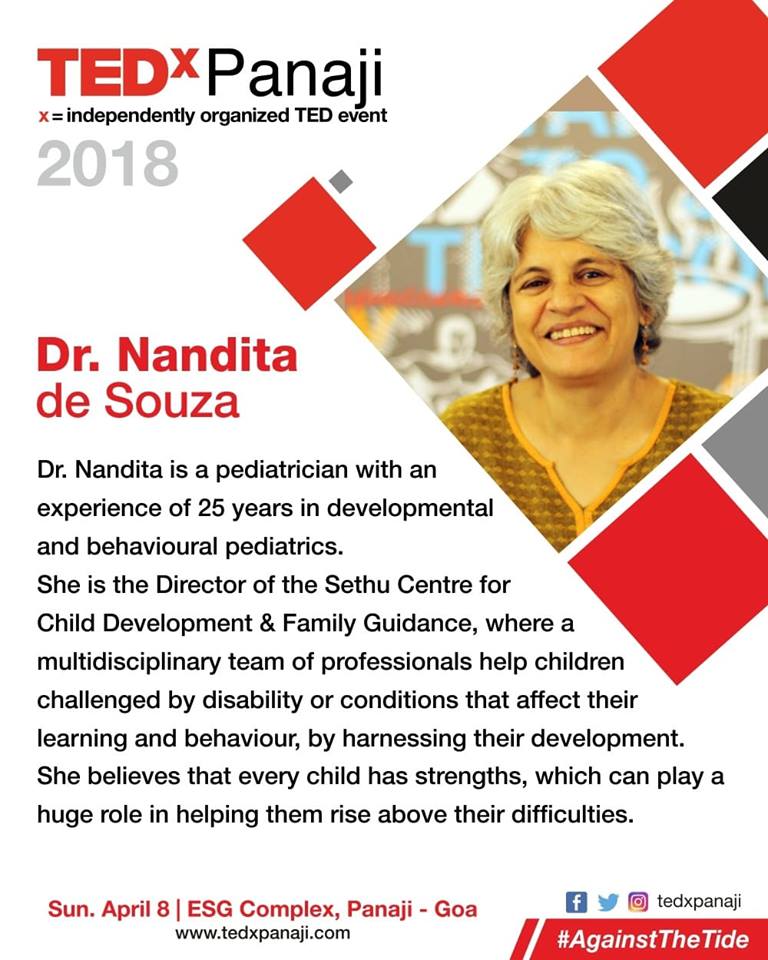 Another thought-provoking audience Q&A session with these two speakers and performing artist, marked the end of the third session. The event ended at 7:30 p.m. with a vote of thanks by the organiser and curator, Mr. Dattaprasad Shetkar and a thunderous round of applause for the entire organising team.

It took me almost an hour after the whole thing ended to digest the fact that I had actually spoken at a TEDx event! If I had to describe me in one word, it would be: euphoric.

A big thank you to the organising team, technical crew, curators, volunteers, performers and of course, my fellow speakers, for making TEDxPanaji such a memorable experience. Your constant support, encouragement and constructive criticism was an immense help.

Special thanks to Mr. Dattaprasad Shetkar & Mr. Saieesh Gandhi for their valuable inputs during the preparatory stages of the talk.

Swim #AgainstTheTide, because only dead fish go with the flow.